by Brad Ferris on June 30, 2007
So the results are in…and although the professional managers put in an admirable effort so far, it looks like they have quite a ways to go if they hope to even up this competition by the end of the year. The question we’ve been asking among ourselves over the last month has been, “Who knew that costs could impact returns so much?” 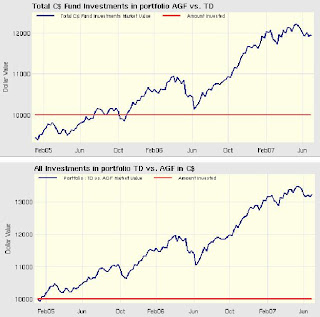 It’s important to realize this isn’t a “perfect” example and there are many flaws in the process, yet it is making a startling impact on my own view of what I’ve believed for quite some time and no doubt shocking to others.

To start the competition Mark’s front end fees cost the AGF portfolio $540.00 or 5.4% in comparison with zero fees for my TD portfolio. Also, the AGF port has an average MER of 2.51% (Morningstar X-ray Tool) while the TD port has an MER of 0.63%. (Hypothetically the MER’s should be +/- 0.11% according to Morningstar.ca) Although the graphs of each portfolio show a striking resemblance, the fees and how they affected returns are where most of us were surprised.

My expectation at the start was that the difference of 1.88% on the MER’s would be accounted for easily in the difference of returns, but the initial loads of the AGF funds is what seriously hurt the performance.

The difference in total fees amounts to $1052.05 YTD, while the overall performance difference between portfolios is measured at 12.63%. Remember, this is only since January of 2005 (2.5 yrs). Even if we exclude the initial $540 in front-end fees, the difference in costs amounts to 5.12% of returns.

Oh…its also important to realize I didn’t include the backend fee on the AGF Dividend Income fund of 2.5% which would add approx another $37 if included in the costs.

But…we still have six months left and no one knows what the market or managers will result with at the end of 2007. But in my own opinion, the argument of costs never affecting performance has been seriously put into doubt, right Mark?

Thank you for subscribing to TMWTFS
{ 2 comments… add one }