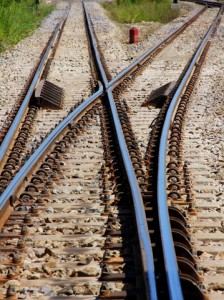 Which Direction Will Canadian Pacific Go?

Pershing Square Capital Management CEO Bill Ackman held a town hall meeting on February 6th in Toronto Ontario to present to Canadian Pacific (CP) investors directors for nomination to the Board of Directors and to introduce Hunter Harrison as a candidate to replace embattled CP CEO Fred Green.

Harrison, as many investors already know, is the former CEO of Canadian National Railway (CNR). His impressive track record at Illinois Central (1989 to 1997) is well documented with his impact on CN Rail, after its purchase of Illinois Central in 1998, as CEO (2003-2009) helped propel CN to an industry leader in North America.

I’ve owned CN & CP in my Dividend Growth Portfolio since August 2007 and January 2008 respectively. While both are important components of my industry exposure to transportation I’ve always held CN in a higher proportion than CP within the portfolio for many reasons.

Usually CNR is targeted at a 4.0% allocation while CP is targeted at 3.0-3.5%. The simplest reason for this is that CNR has outperformed CP consistently since I’ve owned both stocks and also historically through what I’ve tracked in their financial performance in my spreadsheets.

CP has been the little railway that never could.

Stock Analysis Mailing List members have already received a spreadsheet with a comparison of performance of both companies and a copy of the presentation Bill Ackman made to investors on February 6th. (Join before February 20th to receive this post in full – message sent within 24 hrs of joining.)

The reason I think that Ackman and Pershing Square Capital Management will succeed with this plan for a number of reasons:

First Hunter Harrison has to be motivated enough to pursue the CEO position and believes he can make enough money for shareholders and himself to abandon his pension and benefits through his previous CEO position at CNR.

Pershing Square Capital Management has an obvious invested interest in Canadian Pacific’s success as CP is the second largest holding of their $11 billion fund with a 14.2% stake (16% of funds).

Shareholders, like me, are being presented with a very compelling argument on the competence of current management (CEO & Board). All I need to do is compare the track record of CP versus its industry rivals and there is a clear underperformance.

CNR, in stock performance alone, is up 41.5% over the past five years compared to 19% for CP. The dividend, an incentive for investors to invest their capital, has risen by 57% in CNR and only 30% in CP over the same time period.

Operating Ratio, the measure of operating costs as percentage of revenue, is one of the most compelling metrics for this move in my opinion. The higher the ratio the less efficient the railway and CP has a very high operating ratio both historically and over the past five years. Worst still the growth of their operating ratio in the past five years is 40 times higher than Canadian Pacific’s’ historical average (see SAML).  CNR has a positive growth rate in their Operating Ratio also, but CP’s is still 2.6x higher than CNR’s.  This means that CP is doing a worse job of controlling their operating ratio and allowing it to climb well above their historical average.

My gut feeling is that the proxy will win support either this year or next.  While it is ambitious for Harrison & Ackman to target a 60% operating ratio within four years I don’t think it is unrealistic given Harrison’s track record and the management team that Ackman is proposing to support Harrison in this endeavour.  CP does have a very attractive portfolio of tracks and current clients with many of its inefficiencies being targeted in this proposed change in management.  Either CP’s current management need to demonstrate to shareholders that they can make gains (not seen in 2011) or I do believe this change will occur and that shareholders will likely support the move to unlock the value within Canadian Pacific.

A peer of mine did bring to my attention that one significant concern should Harrison become CEO is that talent from CNR could be “poached” when non-solicit and non-compete agreements between Harrison and CN expires sometime during 2013-2015.  A path of succession would be created if Harrison took over the CEO reigns that could inspire movement from the ranks of CNR to CP in the next few years.

Disclosure: I have equity position in both CNR and CP at the time of this post.
{ 0 comments… add one }