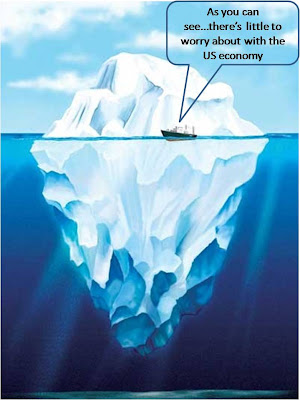 […Bernanke’s Alaskan Cruise…]
As many investors are aware – this afternoon the long awaited decision on US interest rates will be announced with much apprehension. The subprime mess is potentially still in its infancy, inflation is creeping up in prices (wheat, corn, energy) and everyone expects the US-Fed to come to the rescue with Mr. Bernanke at the reins with a 25 or 50 basis point decline in the Fed rate.
But the sad reality is its likely too late and anything done today will have little or no effect on the state of the US economy. The mortgage mess in my own opinion is like dirt in your boots. You feel it there, it bothers you, but you really have no idea how much is in there until you shake it all out.
Mortgage lenders, banks and other companies associated with ABCP had no or little business in qualifying a large group of home owners for a mortgage at or below the prime rate. Some might be surprised with the number of foreclosures already on the market, but we’re likely to see more activity coming in waves as we’ve recently seen in earnings warnings from companies such as E-trade Financial (brokerage in mortgages?).
The market is all about balance and for a good part of the last few years as this bull market has dragged on we’ve seen record profits, record wealth and record borrowing in order to sustain the spending activities of many economies. The problem is you can only borrow so much before the bank finally says no. With the stock markets eyes on this mess, financial institutions will be feeling increasing pressure to vacate high risk exposure to any and all subgroups. Any cut in the rate today will signal the end and possibly push the US economy into recession.
Where most investors see a recession as the most feared event to their portfolio; the fact is it might be needed in this situation. Consumers are already stretched too far in their borrowing and with so many homes on the market – where will the money be to buy them even at half the price?
I’ve largely been trimming my exposure to medium-quality US assets in recent months anticipating turmoil such as this. With the price of the CDN $ creeping above $0.98 today the picture I’m beginning to see is that for a properly constructed RSP strategy, this period in time may be one of those rare opportunities you see once or twice in a lifetime.
So we wait and see…and the garage sale may start sooner than anyone expects
Thank you for subscribing to TMWTFS
{ 0 comments… add one }